Up until the early nineteen sixties, most believed that the 40 km diameter dome with a 20 km wide surrounding collar of upturned upper-crustal strata surrounding the small village of Vredefort, roughly 120 km south-west of Johannesburg was cryptovolcanic, that is, a ‘hidden’ volcano with no signs of volcanic material or prior volcanic activity (Bucher 1963)

Early in the twentieth century a geologist from Stellenbosch University had suggested a ‘volcanic explosion’. He also predicted that ‘When one is dealing with an extraordinary phenomenon, no possibility is too extraordinary to be worthy of consideration’ (Shand 1916). Then in 1936 two geoscientists proposed that this supposed cryptovolcanic structure could be the result of a meteorite crater with a rebound dome in the middle surrounded by rings. This would make the overall crater much larger than the 80 km central rebound. However, Vredefort still puzzled them. They said ‘One hardly knew which was better - a meteoritic hypothesis without meteorites or a volcanic hypothesis without volcanics’ (Boon & Albritton 1938).

Eleven years later the well-respected Reginald Daly, Professor of Geology at Harvard backed up Boon and Albritton and added that the energy released by the large, high velocity meteorite would have been great enough to volatilise target and meteorite materials. This event would have been both explosive caused by pressure, and percussive, from the impact (Daly 1947).

Geological and geophysical data gradually began to show support for the meteorite theory. A well-known American planetary scientist wanted to prove that the Vredefort Dome was a crypto-explosive impact structure (Dietz 1961b) and suggested to a Witwatersrand University researcher, Robert Hargraves, that he look for shatter cones, sharp pointed rock chards, which he duly found. He also discovered that all the cones, in their original positions, pointed to the centre of the dome indicating that this was the source of the shockwave (Hargraves 1961). Later others found signs of shock in quartz (Carter 1965). About this time (Michael Dence 1964) from Canada again suggested that the Vredefort Impact Structure looked like it could be a far larger complex crater with the Dome being only the remnant central ring, or rebound. Further proof of the impact structure came when crystals of coesite and stishovite were discovered. These are high pressure and temperature forms of silica that can only be derived from very extreme pressures, too high for volcanic activity (Martini 1978).

In spite of all the extraterrestrial meteorite impact validation coming through, most South African geologists still believed that the structure was volcanic in the form of a cryptoexplosion. In July 1987 the International Conference on Catastrophes in the Geological Record and Cryptoexplosion Structures was convened in Parys, a town within the dome. After many papers were presented and arguments put forward, it was voted that, based on the evidence, what was then known as the Vredefort Crater was a large complex impact structure with the Vredefort Dome being the rebound central core. The term Structure in place of Crater was coined by two University of Witwatersrand researchers (Reimold & Gibson 1996) and I agree. This terminology is used throughout these hypotheses.

Scientists had measured the present depth of the structure’s floor below present sediment and debris at 15 km using seismic technology (Friese, Charlesworth & McCarthy 1995). From this others calculated that the highest point the dome reached before collapsing was 29 km (Henkel & Reimold 1996). From shatter cones the transient cavity diameter was estimated to be about 124-140 km. Making use of these values in relation to other exposed Earth and Moon craters, the outer rim was calculated to be about 270-300 km. The latest method involved estimating the diameter of the base of the rebound at floor level as 95 km and then calculating a final rim diameter of about 284 km. This would make the Vredefort Meteorite Structure the largest known meteorite impact site in the world (Therriault, Grieve & Reimold 1996).

The final crater diameter is based on the assumption that the original structure was round. However, if the gold reef lining the impact crater is linked, as I propose, then it is possible to follow a map of the Witwatersrand gold mines (Vorster 2001). The jelly bowl shaped crater is roughly oval in shape, 330 km long on its current south-west to north-east axis and about half that width across. At the time of the impact proposed in this article the direction of travel would have been from west to east due to Gondwana’s rotational position and Earth’s obliquity (Fig. 3b).

My hypothesis is that the oval shape is due to a group of three large, fractured metallic, meteorite bodies, from a larger group, impacting Earth at a very shallow angle from the current south-west (Dietz 1961) and north-east trending (Kinnaird 2005). At the meteorite’s entry point, seventy kilometers south of Welkom, the outer crater rim is not visible, the fractured reefs more than a kilometre below ground (Lehmann 1959) are covered with 200 Ma Karoo sedimentation (Fig 1a). To the north-east the high, upturned, old sedimentary Pretoria Group, including Witwatersrand, Magaliesberg and Waterberg, are piled into 40-100 km wide concentric anticlines and synclines, ridges and troughs, or ‘ripples’. Further, the richest reef, 41,700 tonnes of gold and 146,000 tonnes of uranium mined from 1886 to 1987 in the Central Rand Group (Pretorius 1991) through Johannesburg, is robust, exposed and unbroken. Currently the total gold mined in the Witwatersrand by 2016 was 56,000 tonnes (Chamber of Mines 2017). 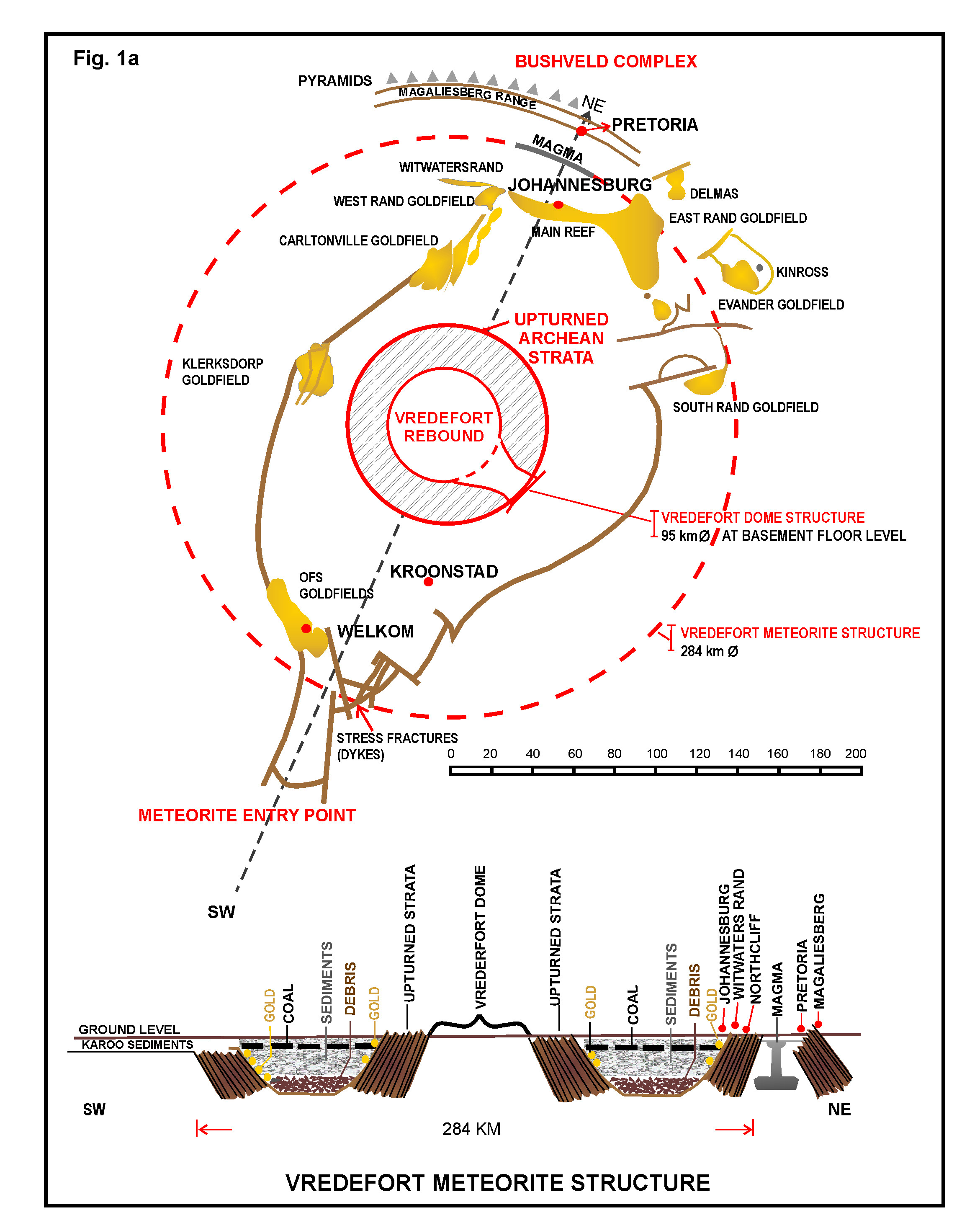 The approach of a string of mountain sized fragments, equivalent to a 28 km diameter meteorite, would have been soundless and barely visible to any lifeforms until the final moments. Their entry speed, about 25 km/s, compressed the atmosphere ahead in brilliant flashes of 5000oC (Struve 1950) seconds before impacting with Earth, one behind the other, at a very shallow angle of about 5-8 degrees (see Fig. 1b & 10c). They penetrated the young overlying, 300-214 Ma strata of Karoo, Ecca and Dwyka then into the old 2700-1800 Ma strata of the Transvaal Group in the Witwatersrand Craton. The explosions from vapourised rock pushed the floor down and lifted the roof of the gigantic chamber until it split in a ring at the 146 km transient diameter releasing a fireball of incandescent gas, containing ejecta and vapourised gold, upwards forming a 1000 km diameter superheated mushroom cloud that lasted for over two hours (Chapter 2, Table 1).

The multi-billion tonne chrome fragments, with iron and other dense metallic particles, penetrated the chamber sidewall below the Witwatersrand Ridge, melting as they went, and continued hydro-dynamically subsurface at hypervelocity >3 km/s (Dietz 1961a). In this case the entry speed was 25 km/s reducing to 3 km/s after another two hundred kilometers, forming the Bushveld Complex (Chapter 8).

Within the main Vredefort Structure chamber, this was followed several tens of seconds later (Melosh 1989) by the centre of the floor rebounding upwards and piercing the roof of remaining central sedimentary layers to form the Vredefort Dome surrounded by an upturned, and some overturned, 20 km thick collar of Pre-Cambrian rock (Dietz 1961).

Where the thick, old Transvaal Supergroup strata had been blasted off in a neat ring around the 146 km diameter transient chamber, the vertical chamber walls below began to collapse inwards then ejecting out at ballistic velocity. Slowly the remaining outer strata sheared off from the Magaliesberg in a wider ring and slumped (Turtle 2005) at 60 degrees into the crater (Whiteside, Hiemstra, Glasspool, Pretorius & Antrobus 1976) which doubled the transient diameter, the jagged north-facing rim forming a 56 km wide cliff rising 200 metres above the torn plain. Today, from the Johannesburg suburb of Northcliff there is a wonderful view where one can look 30 km northwards to the Magaliesberg Range passing across Pretoria and see the next of a row of matching, south-facing, upturned strata that I will call the first of the ripples (Fig.6). 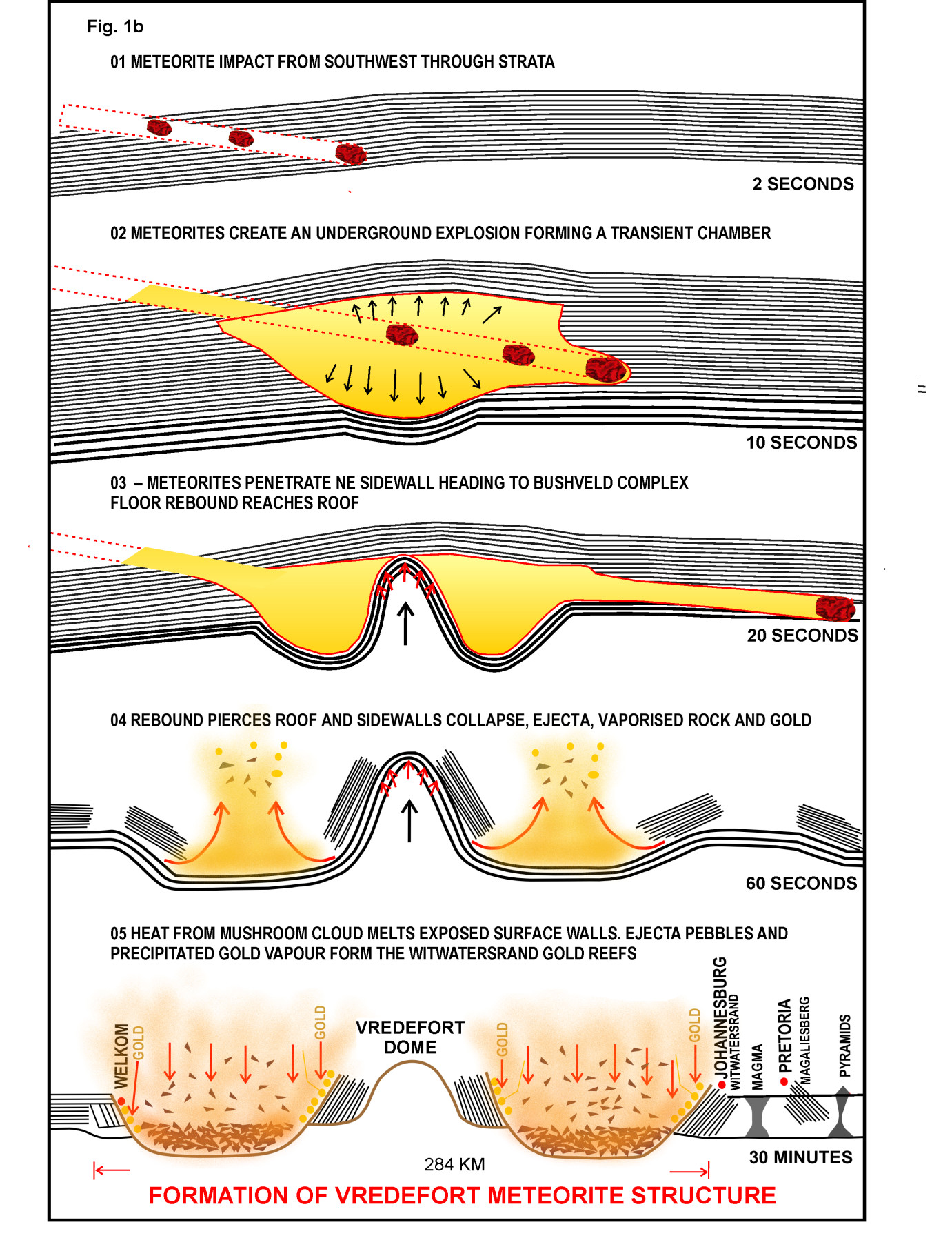