It cannot be a coincidence that about 80 comparatively young, 100 Ma, kimberlite diamond pipes encircle the Vredefort crater. The largest of these are located from Letseng in Lesotho, Jagersfontein in the south-east, to Kimberley in the south, Finsch in the south-west, Jwaneng and Orapa in the west, Cullinan in the north and Venetia in the far north. Most of these are 200-300 km from the Vredefort Dome except Orapa and Venetia which are about 600 km (Vorster 2001).

In 2014 the South African diamond production was over eight million carats. That excludes Letseng, eleven diamonds over 100 carats in the first quarter of 2018, Botswana’s Orapa and Jwaneng, and the diamonds washed into the Atlantic and mined in Namibia and Angola. The first diamond found in 1867 was the Eureka in Hopetown weighing 21 carats and the largest from Cullinan that weighed 3106 carats uncut (Chamber of Mines 2017).

The requirements for the rich quantity, quality and size of diamonds to be formed in this specific area are as follows: A source of carbon is required to be converted into diamonds, this being from carbohydrates in gas, oil or coal. A sufficient amount of carbon needs to be deep underground, contained, and subjected to pressures of 100-150 Giga Pa, which is 1 to 1.5 million bar (atmospheres). It also needs to be raised in temperature to over a thousand degrees Celsius (Hart 1992) and it needs to be brought up to the surface from about 150 km deep in a relatively short period of time.

I propose that the Vredefort meteorite impacts drove large amounts of carbon down under the Earth’s crust from the Glossopteris based Vryheid Coalfields. These coal seams were laid down below the Ecca formation from 298 to 252 Ma. This source of carbon then mixed with the mantle material.

Over the next 114 million years, as the mantle plume rose at 5 cm per year, the carbon-rich magma sank down the sides of the plume until they reached the core only to be circulated up again, a distance of 5,800 km. When they reached 150 km below the surface, where the pressures and temperatures are ideal the carbon-enriched magma formed diamonds. Increased heat in this area created the conditions 100 Ma for the diamond-rich kimberlite to expand and explode upwards through a ring of weakened crust surrounding the Vredefort Structure.

This theory is supported by the time/distance between the Vredefort impacts and explosions of kimberlite out of the mantle plume and the composition of minerals in mantle peridotite which confirm the depth and temperature for the source of the kimberlite diamonds (Wylie 1975).

Although small diamonds have been found as a direct result of meteorite impacts (Anders 1965), these diamonds were not created directly by the impact as no coesite is found in the South African kimberlite (Dietz 1961). 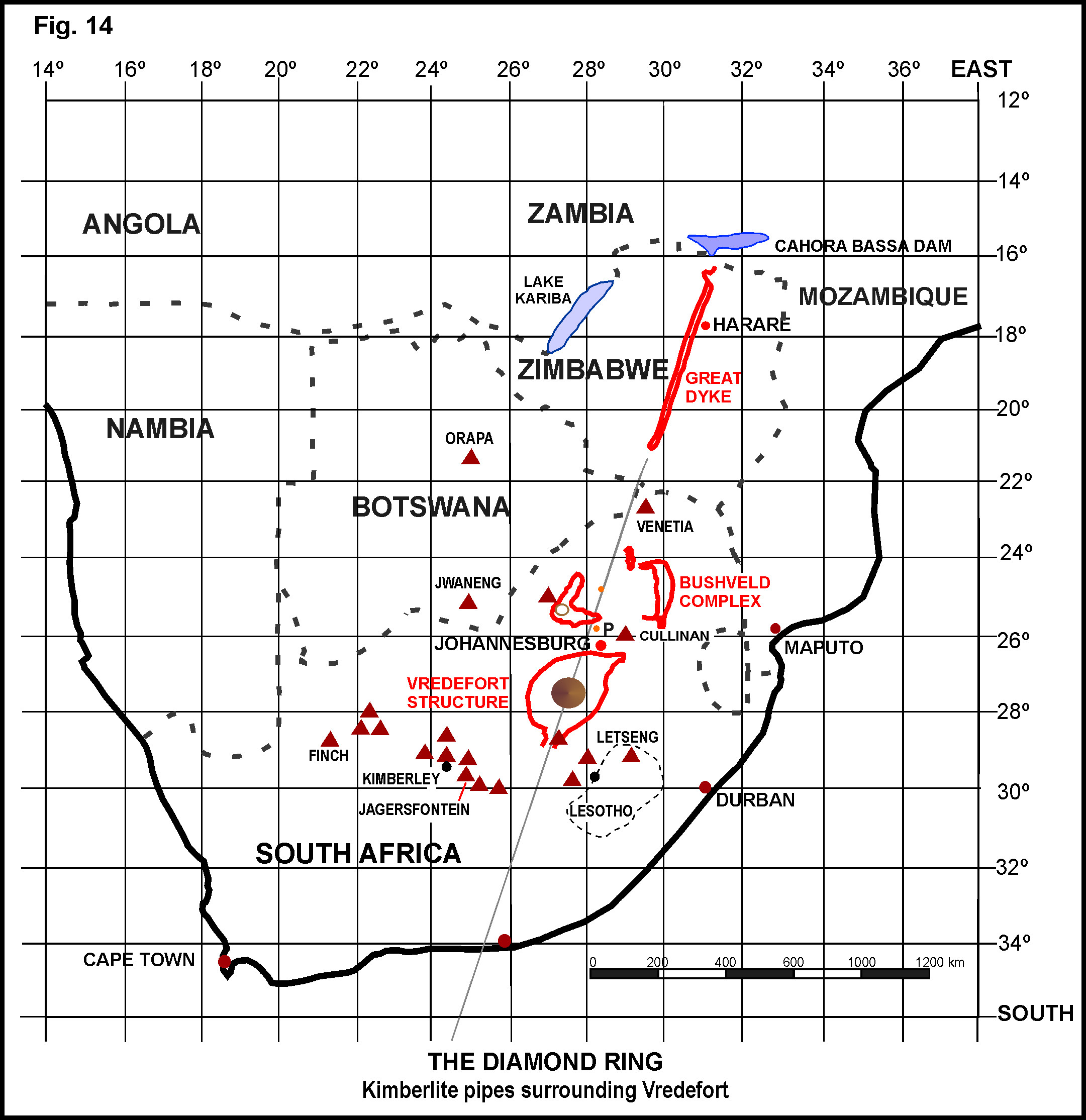