I hypothesise that the Great Dyke is an anachronism for a straight, 550 km long astrobleme, the word coined by Robert Dietz for an ancient scar left in the Earth’s crust by a huge meteorite (Dietz 1961a) and that it was caused by an independent mineral fragment of the Vredefort Meteor Shower.

Its lopolithic, Y-shaped cross section, gouge scars the top of the old Zimbabwe Craton. Satellite pictures and terrain maps of the Great Dyke show that the direction started in a straight line from the current southwest and ended in a swirly question mark at the higher north-eastern end as it ran out of directional speed. Imagine a single large underground nuclear explosion that could make a cavity that looks like the Kimberley Big Hole. Then imagine a multi-million tonne high-chrome projectile with the energy of millions of nuclear-sized explosions ploughing through the layered crust about a kilometer or so below the surface at an entry speed of 25 km/second. The Y-shaped cross-section is from the hypervelocity, subterranean penetration that ‘zipped’ through the existing rock strata horizontally, the whole process was over in less than a minute. 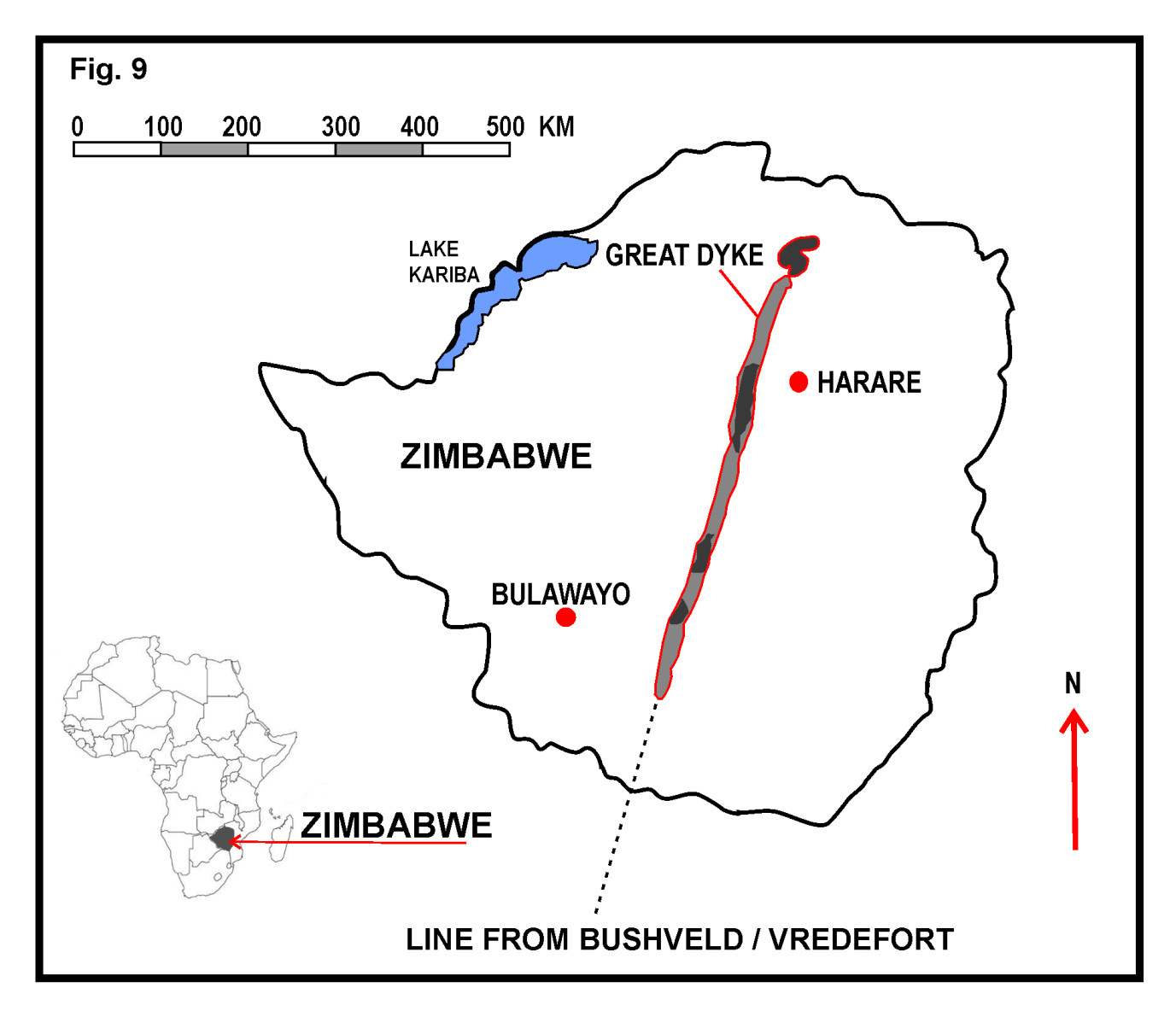 How could the meteorite travel 550 km and maintain the same level below ground? Consider that the sedimentary target layers were relatively undisturbed, still lying horizontally. The large meteorite fragment entering almost parallel to the ground (Fig.10c), near Tod’s Guesthouse on the Beit Bridge-Bulawayo Road, would hydrodynamically follow the weaker joints between the layers of strata, blasting off the roof explosively. This would result in the continuous Y-profile, and shedding off its own mineral layers, staying at that level until eventually coming to a stop. The un-deformed structure of the Great Dyke shows that the thick, old Zimbabwe Craton was stable when the intrusion occurred.

One might wonder why the Great Dyke is a gouge of approximately the same depth parallel to the Earth for 550 km whilst the fragments from the Vredefort Meteorite penetrated much deeper, causing an underground explosion, before continuing on to the Bushveld Complex. The reason for that is the curvature of the Earth. Before impact the shattered fragments were spread out across many thousands of kilometres even though they all came from the same direction. Some of the chrome particles located lower in the group relative to the target would impact south of Welkom whilst others, higher up, would be ‘over the horizon’ and only just skim the ground. The difference in inclination is about 5-8 degrees depending on where the Vredefort Meteorites first penetrated (Figs. 10b, c, d).

This Great Dyke 3–12 km wide gouge has near horizontal sills of igneous ultramafic layers. The ferromagnesian rock includes large amounts of chrome and platinum and also contains economic amounts of nickel, copper, gold and platinum group metals. In fact the mineral composition and grades match the Merensky Reef in the Bushveld Complex closely except for large quantities of asbestos which make mineral recovery difficult.

The similarity of the Great Dyke with the Bushveld Igneous Complex is striking.

Firstly, the horizontal intrusive layering of sills is indicative of a formation that was not volcanic

Secondly, the minerals contained in the magma are similar to those of the Merensky Reef which means it is likely that they were derived from similar chrome and platinum-rich metallic particles of the same extra-terrestrial source

The third similarity is the distance that the platinum-rich chrome fragments travelled below ground level. The Great Dyke is 550 km long across Zimbabwe and the Vredefort/Bushveld fragments penetrated from south of Welkom to north-west of Polokwane, about 599 km.

The fifth interesting observation that connects the three events is that the straight–line scar of the Great Dyke is in the same direction and path as the current southwest–northeast trending impact of the Vredefort Meteorite. In fact, on a large-scale map you can draw a straight line from the meteorite entry scar 70 km south of Welkom, through the centre of the Vredefort Dome, through the highest point of the Witwatersrand Ridge at Northcliff, through the middle of the Bushveld Complex near Bela-Bela, pass over the South African border at Pontdrif, and line up precisely with the Great Dyke! Maps for Southern Africa and the latest for Zimbabwe, which shows background terrain, are useful for seeing the Great Dyke and above alignment (Map Studio 2015).

On maps of today’s era we see this line from the Vredefort Dome to the Bushveld Complex to the Great Dyke in a southwest to northeast direction. If the Vredefort Meteor shower was the remains of a shattered planet or forming planetoid, possibly from the asteroid belt, we would expect it to approach on the planetary plane, from west to east. As explained in Chapter 3.0 the direction of this line in 214 Ma would have been west to east due to the rotational position of Gondwana and the obliquity of our planet Earth.

Now, let us look at the age estimation of the Great Dyke. The Dyke lies within the Zimbabwe Craton and has been dated at 2.575 billion years old (Oberthuer, Davis, Blenkinsop & Hoehndorf 2002). However the target rock of Zimbabwe Craton is aged from 2.8 to 2.5 Ga (Dirks & Jesma 2002). This means that the age given for the dyke is about the same as 25% down into the craton strata.

If the core material of a metallic meteorite consists of elements that cannot be aged, the age measurement will come from material in the magma derived from the target rock. It is presumed that the age measurement will be reset to zero during the melting or solidifying process. This does not always happen as a result of meteorite strikes (Taylor 2018). Therefore, for the same reason that the age of the Bushveld Complex was aged by the strata layer in which the projectile is imbedded, so it is with the Great Dyke. As the meteorite fragment entered from the side into a strata layer of 2575 Ma its age could be anything from that till now. I believe that it was 214 Ma.